MC's | Presenters
Mike Minogue and Jason Hoyte met behind the microphones as part of the wildly popular Alternative Commentary Collective during a particularly dire ODI between the Black Caps and Zimbabwe. They slowly realised they shared something quite special: a fearsome loathing of salted cashews and an absurdist sense of humour.

Within months they had launched a hit podcast All Talk with Jase and Mike; been scooped up as co-hosts by Radio Hauraki in the coveted drive time slot for the now wildly popular The Big Show; and created the hilarious satire Talkback for TVNZ which was nominated for Best Comedy at the 2021 NZTV Awards but lost to that weird documentary Wellington Paranormal. A show which, incidentally, stars both Mike Minogue and Jason Hoyte!

Between them Mike and Jason have over 50 years of experience in New Zealand’s sports; tv; film and radio industries. They’ve got more funny yarns to spice up your next event than you’re had salted cashews. And some of them might even be true! 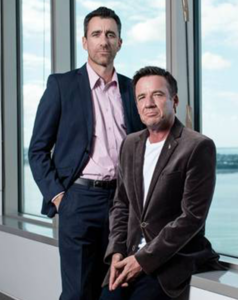